Home Community Out of jail and into jobs

Kavanagh, who recently retired as director of the Department of Corrections in Howard County, initiated programs that provide opportunities and growth for inmates.

Notably, he was never too busy to sit down with inmates in Irene Murphy’s classroom at the Howard County Detention Center.

Murphy teaches a Lifeskills, Education, Employment Program and Kavanagh said that inmates who attended the classes came out as better people.

“She’s tough but tough for the right reasons,” said Kavanagh.

Sometimes, when Murphy threw inmates out of her class, Kavanagh convinced her to let them back in, adding that inmates aren’t what they seem on the surface.

“Sometimes, the ones you think will never make it out of jail are the ones who go out there and get a job – if they’re given a second chance,” said Kavanagh.

Murphy said, “What I will miss most about Jack is both his professional and personal support. Whenever I needed to consult with him about a student or situation, he was available to listen to my issues, help me put things in perspective and assist me in determining a course of action.”

Kavanagh has led and supported many enrichment programs at the Howard County Detention Center, including Seeds of Change, operated by Howard EcoWorks, a program that provides education and vocational training for inmates to maintain a native plant nursery.

With a technical assistance grant from the Urban Institute, he was able to exchange ideas and best practices with other corrections leaders across the country.

“What we were able to do is expand programming at the jail,” he said.

He and his staff improved assessing incoming inmates, attempting to answer the question: Why are they getting in trouble?

Kavanagh noted that many of these programs were started and remain supported by grant funds obtained by former deputy director Trish Schupple.

Kavanagh also tried to find answers by making regular appearances in classrooms and workplaces, notebook in hand, so that he could write down each inmate’s issues, concerns or just plain gripes.

“He was a man of his word,” said Murphy. “If he told an inmate he would get back with him, he always did.”

Kavanagh wasn’t just being nice – he was methodically testing his experience and the best practices he’d learned from his peers across his country. He also carefully listened to inmates themselves.

“Sometimes the inmates did not have all the facts and Jack provided them with concrete, reasonable explanations why certain things might be happening,” said Murphy. “That approach certainly deescalated negative behavior and earned Jack respect from even the most hardened inmate.”

Kavanagh approaches each inmate as a human being, not just a number.

“I’ll never forget working with a women’s prison population for the first time,” he said. “What shocked me was how many of them were abused and how many had mental health and addiction issues.”

As he moved up the career ladder in the corrections sector, he never lost the ability to see each inmate as a person he could potentially help stay out of prison – and stay in the workforce.

His drive to change the way prisoners were treated came from many years of watching what went on in prisons.

“I wasn’t totally happy with the way the corrections sector was doing business,” said Kavanagh. “I came to that realization when I started looking at statistics and results.”

In the year 2000, the recidivism rate in Maryland was over 50 percent.

“One day I was talking about that rate to my brother, who was in business with Northrup Grumman,” said Kavanagh. “He said, ‘If you worked for us, you’d be fired in a heartbeat if your failure rate was over 50 percent.’ ”

Kavanagh took those words to heart.

At that time, in the prison system nationwide, more and more prisons were being built, often with little thought for preventing recidivism.

“You can’t lock people up for 20 years with no programs,” said Kavanagh. “What do you think is going to happen? You’ll have bitter, angry people who haven’t had the opportunity to make changes.”

And, ultimately, that’s not a good public safety policy either, Kavanagh reflected.

“I’m grateful that I had the ability to change the culture of the detention center,” he said. “You always wanted to keep people safe but you also wanted to give inmates the opportunities to improve their lives.”

Kavanagh has many people he wants to thank.

“Building the system for risk and needs assessments as well as program expansion would not have happened without the hard work of the staff at the detention center and the support from the county administration, the community and county agencies such as the health department, community college, Office of Workforce Development, Office of Community Resources and Services, Silverman clinic, Humanim, Howard House, and agencies  such as Living in Recovery that provide sober living after release.”

Kavanagh noted he was also grateful for buy-in from the state’s attorney’s office, public defender’s office, police department and the courts.

“All of them were fully supportive,” he said.

As Kavanagh retires, he leaves a legacy of achievement.

“We saw a pretty big shift in how we approach our business,” said Kavanagh. “We’re already seeing improved recidivism rates.” 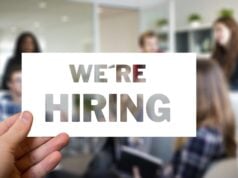