“Well, we knew it was too easy. So, just to see what we’re REALLY made of, we were shown what the roof was made of. Up close and in person.

“Last night, in the middle of our months-long roof raising operation, the winds of fate prevailed and decided that, instead of simply raising the roof, we should just go ahead and build a new one. Was not our decision, but the bright side is all of the money we save on imploding.

“Nobody was hurt. That is, of course, the most important thing. Second most … yes, everything will be ready for season opening.”

According to a Facebook post by the Downtown Columbia Arts & Culture Commission, until a complete investigation has been completed, the precise cause of this accident cannot be known. That investigation is commencing as soon as possible; in the meantime, the team at Merriweather will begin assessing next steps for the project. 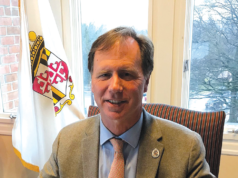