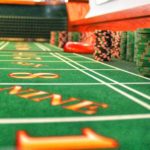 The Maryland Lottery and the state’s six casinos combined to deliver a record-breaking total of more than $1.391 billion in funding for vital state programs and services in fiscal 2021. The Lottery shattered its previous profit record by 12.5 percent, while the casinos generated a record-setting contribution to the state – despite operating at limited capacity for more than eight months of fiscal 2021 due to COVID-19.

The combined total of Lottery and casino contributions to the state beat the previous record of $1.311 billion in fiscal 2019 by $80 million (6.1 percent).

The casinos generated $1.746 billion in gaming revenue and contributed $723.5 million to the state, a 0.8 percent increase from the previous record for state contributions set in fiscal 2019.

The new sales record propelled numerous Lottery records in addition to the all-time profit mark. Among the new all-time highs: