Founded by Ben Simon and Ben Chesler to combat daily food waste, San Francisco-based Imperfect Foods ships fruits and vegetables that are considered not suitable for sale in grocery stores directly to consumers’ homes. According to the company, approximately 20 percent of all produce grown in the United States never leave the farm and are either left in the field to rot or taken to a local landfill. The result is billions of pounds of fruits and vegetables discarded on an annual basis.

Imperfect Foods is configured as a subscriber service in which weekly orders, ranging from seven to nine pounds to 23 to 25 pounds, are shipped to families. The new location will continue to function as an East Coast distribution center.

This spring, the company announced plans to hire more than 120 additional full-time workers to assemble and deliver its food boxes based on strong demand. Imperfect Foods indicates the company has recycled more than 116 million pounds of food since its founding five years ago. 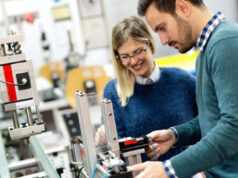