Robert Herjavec made a deal with Baltimore’s Hungry Harvest CEO & Founder, Evan Lutz back in January of 2016 because he wanted to be a part of a business that could make a real impact. With 25 million pounds of food rescued and over 1.6 million pounds donated or subsidized in the fight against food insecurity since that original deal, Herjavec got exactly what he was after. And now he’s having Hungry Harvest back on Shark Tank to give an update on their explosive growth.

“Robert was crucial in helping us grow the business. We had a huge influx of customers as a result of the initial exposure on the show, which in turn helped us grow our impact. We were grateful for the opportunity 5 years ago and feel even luckier to talk about the good work we are doing today to help feed our local communities, especially during the pandemic” says Lutz.

The update will primarily focus on Hungry Harvest’s COVID-19 relief response. Over the past 9 months, their Emergency Food Box program has helped distribute over 670,000 pounds of fresh fruits and vegetables to those in need or with limited access.

Hungry Harvest will be making their second appearance on Shark Tank, Friday, December 4, 2020 at 8 pm ET on ABC.

Lutz founded Hungry Harvest his senior year at the University of Maryland from his dorm basement. The first deliveries were to 30 customers, 15 of which were free trials, in June 2014.

The Hungry Harvest team has grown to over 40 coworkers and is currently delivering across Maryland, Washington, DC, Virginia, Philadelphia, Southern New Jersey, Delaware, South Florida, the Triangle Area in North Carolina and the Detroit Metro Area in Michigan. 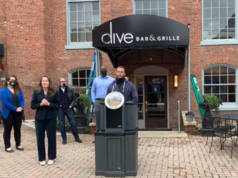