Committee’s Report for the fiscal 2021. The committee is tasked with making recommendations to the county executive on revenue projections, General Obligation bond authorizations, long-term fiscal outlook, and County revenue and spending patterns.

The committee reviewed the revenue projections and expenditure requests for fiscal ’21 and beyond. Based on these presentations, the committee determined that Howard County revenue growth is projected to average 2 percent -3 percent during the next few years but that expenditure requests are considerably outpacing that growth. County government’s revenues are based on two primary revenue streams that fill most of its general fund: property (49 percent) and income taxes (41 percent).

● An analysis of the long-term fiscal outlook including multi-year projections; and

● Other findings and/or recommendations that the Committee deems appropriate.

Potential fiscal challenges in Howard County for fiscal ’21 include slowed wage growth, declining development, minimizing tax base and legislative changes. For these reasons, growth at slower than historical rates are likely to continue during the next two to three years. Based on the economic and fiscal challenges facing the county, the committee recommended continued caution in both expenditure growth and additional debt authorization. 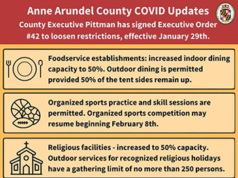