The Howard County Council approved the FY21 Capital and Operating Budget May 27, increasing spending 1.2 percent over the previous year.

The amended budget included about 98 percent of the proposals from Howard County Executive Calvin Ball.

The amendments prioritized funding for the county’s essential services, focusing on health and safety and school construction and renovations.

“Our FY21 budget is fiscally responsible but at the same time will allow our government to continue to provide the services Howard Countians appreciate,” said Jung. “We will continue to do all that we can to make sure that our county remains on strong economic footing.”

A proposal earlier in the year by the county executive and supported by Councilmembers Opel Jones (D-Dist. 2) and Christiana Rigby (D-Dist. 4), restructured the county’s recordation tax to generate approximately $21 million to address an operating budget shortfall.

That resolution failed 3- 2 with Jones and Rigby voting in favor.

Ahead of the vote, Ball and the budget amendment sponsors agreed to several adjustments that increased allocations for road resurfacing, pedestrian and multi-modal transportation initiatives – including development of the Complete Streets Manual and ramps compliant with the Americans With Disabilities Act – as well as traffic improvement installations. Other adjustments included retention of currently vacant government positions deemed by the county executive as operationally critical.

Increased funds were added to capital projects overseen by the Department of Public Works, fiscal year 2022 bonding for the New Cultural Center in Downtown Columbia and improvements for the Tiber and Plumtree Watersheds.

On the revenue side, Councilmembers Jung, Rigby and Jones voted to increase the transfer tax by a quarter point.

The budget adjustments resulted in $75 million in General Obligation bonds for capital funding. The Operating Budget was reduced by $21 million, which was achieved by freezing vacant positions and shifting fund balances recommended by the county executive and recouping savings from refinancing certain county debt.

During a May 18 virtual public hearing, the only support for the recordation and transfer tax measures came from the Howard County Board of Education (BOE) and the PTA Council of Howard County.

“I’m just happy to see there [was] an increase as opposed to no increase or a cut,” said Mavis Ellis, BOE Chair.

Yet while 25 percent of the transfer tax was earmarked for Howard County Public School System capital projects, there was no guarantee that even a portion of recordation tax revenue would necessarily find its way to the school system.

Many in the development and real estate industries argued that the measures could unintentionally harm the county in the long term.

During a public hearing on the recordation tax, Bruce Harvey, president of Williamsburg Homes, said small county-based developers would incur the tax on indemnity deeds of trust, while larger multi-state developers could borrow against properties outside of Maryland to avoid the same tax.

“I’m going to have a hard time attracting pension and retirement funds that are investing in us instead of investing in the market,” said David Finch, general counsel for Columbia-based Corporate Office Properties Trust.

Yungmann said the budget amendments did not cut anything that provided services during the pandemic.

“A lot of money we took out was leftover money from prior appropriations … and there were very few capital projects that are ready to advance that we [targeted for cuts],” he said. “People are going to act like we dug really deep and created austerity, we didn’t.”

Councilwoman Rigby did not respond to The Business Monthly’s request for comment on this story.

“Mr. Yungmann, Ms. Walsh and I … [were] aligned in thinking we really need to take a fiscally conservative outlook this coming year and not base a balanced budget on speculative revenues,” Jung said. “Listings in the month of April were down 45 percent, and that’s as much as we have to go on right now. I think the better part of valor this year is to be safe rather than sorry.” 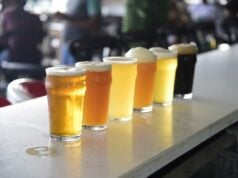