BWI Thurgood Marshall Airport and Clear Channel Airports are finalizing a digital advertising program to reach the approximately 74,000 travelers that normally pass through the terminal in a day.

A 10-year contract has been signed that calls for Clear Channel to develop an integrated passenger experience program.

The deal, which was approved by the Maryland Board of Public Works last March, calls for Clear Channel to create overhead digital displays in high-traffic areas of BWI Marshall.

Installation “will begin shortly and be up by spring,” said BWI Marshall spokesperson Jonathan Dean. “This is a very broad initiative. We don’t have an exact number concerning how many boards will be in place but it will be a comprehensive, dynamic program that will evolve during the next several years.”

Key elements of the program will take advantage of the number of people who pass through BWI Marshall during a given day as well as their affluence, said Jason King, senior vice president of corporate communications and marketing for New York-based Clear Channel Airports.

“We know that the people who go through airports are a highly-valued audience,” said King. “They tend to be decision makers and they also often have what we call ‘dwell time’ while they come and go, so they absorb the messages around an airport.”

“We used to use an airport’s annual passenger counts” to determine ad metrics, King said, “but with Geopath (the nonprofit that quantifies OOH ad activity), we’ve made a hard pivot away from that decades-old method of measuring passenger information.”

And that will move Clear Channel toward a greater understanding of audience behavior “and the true likelihood of the audience consuming the ad or eventually the product,” he said. “That’s a quantum shift in this part of the industry. It will result in a greater transparency and better results for airport advertisers.”

King added, “It can even be used to trigger spots for Zyrtec, for instance when the pollen count gets high.”

As for Geopath, it was founded in 1933 as a joint initiative between buyers and sellers of OOH ads.

“In the 1930s, that usually meant billboards but today OOH offerings are incredibly diverse,” said President and CEO Kym Frank. “We’re like a trade association that doubles as a research organization.”

Geopath provides the same metrics to determine reach, impressions and frequency that Nielsen does for TV, radio, the Internet,” Frank said, “so we provide metrics to Clear Channel Airports, identify however many people are in the market for given products they’re marketing and where these people that might buy them come from.”

One great thing about the Geopath measurements is that advertisers can use the same metrics they would use for a digital sign on the highway.

“They can reach people on the roads, then hit them in the airport, where they often spend dwell time,” she said. “The whole idea is about hitting them multiple times in different environments.”

For its part, Clear Channel is following the trend of digital makeovers in airports that’s gone on for more than a decade. “We’re one of the largest providers in that media space,” said King, “and we have about 100 airports in our program in the U.S. and its territories.”

Concerning the revolution toward digital video in airports, King stressed that while static videoboards are also effective, this new approach “gives the advertiser the ability to buy day parts or the entire day,” he said. “Now, they can make the digital content all about them as they target their audience.” 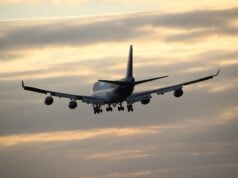