According to the Anxiety and Depression Association of America, Major Depressive Disorder affects more than 16.1 million American adults each year — or roughly 6.7% of the United States population. Depression is also the leading cause of disability for Americans aged 15 to 44.

The disorder plays a disturbing role in the growing incidence of teen and adult suicide, school and workplace shootings, and other tragic events.

“Everywhere we turn in the media, we learn about depression in ways that are quite dramatic,” said Jane Snider, chair of the Anne Arundel County Chamber of Commerce’s (AAACCC) Education Committee.
Speaking as moderator of AAACCC’s forum on Depression in the Workplace and Schools last month, Snider said the program was put together during the course of a year to help inform and educate the business community about a problem that has an impact that extends far beyond the people who suffer from it.

“Part of our objective is to let people know what resources are available, and help businesses gain the insight they need to create a supportive environment for employees suffering from depression,” she said.

“One in 10 adolescents will meet the clinical criteria for depression, and many times it’s undiagnosed,” Culotta said. “Suicide is the third leading cause of death for adolescents,” with the suicide rate for adolescent males six times as great as the rate among adolescent females.

Aside from genetic predisposition, problems of self-identity, gender identity, sexual identity and the influence of social media place a tremendous amount of pressure on teens, he said, while medical treatment protocols and insurance limitations can hardly be described as adequate, especially when it comes to underprivileged children.

“It’s almost impossible to provide what we think is cognitive care that’s going to yield an outcome and do it within the context of insurance. It’s a pretty brutal industry,” Culotta said, acknowledging that many practices do strive to provide some pro bono work.

“It creates this terrible system for people who don’t have the option of going outside insurance networks,” said Dr. Doug Heinrichs, an Ellicott City-based psychiatrist. “I honestly don’t have an answer for that. [It’s a] true systemic problem.”

Moreover, Culotta said, the delivery system has changed drastically since the 1980s, when suicidal adolescents could be hospitalized for extended durations, sometimes up to 21 days.

“We could set up an IEP (Individualized Education Program) in the school and solve some of the problems and stressors that were driving it,” he said. “I haven’t seen a 21-day admission in a lot of years. We now see 24 to 72 hours.”

Therese Borchard, senior writer for Crosby Marketing, of Annapolis, and the founder of Project Hope & Beyond, knows depression from firsthand experience.
“For me, when all the treatments didn’t work, turning my pain into service was the only thing that did work, she said.
An easy accommodation employers can make is to provide more frequent work reviews when necessary, Borchard said, because people who suffer depression constantly question themselves, wondering if they’re performing their job correctly.

“Employers need to know how to empower and build back confidence through good communications, supervisors and feedback,” she said.
The total economic burden of Major Depressive Disorder currently amounts to an estimated $210.5 billion a year, Borchard said, with at least half that figure attributed to workplace costs, absenteeism and reduced productivity. “Reduced productivity itself costs $78.8 billion, the equivalent of 32 lost workdays. Absenteeism costs $23 billion, up 8.3% from 2005.”

Factors such as being overworked, time pressure, lack of support and role clarity, poor feedback, job insecurity and a lack of social support add to the weight of the disorder.

CEOs are also predisposed to depression, she said, as are entrepreneurs who experience a high degree of risk taking, long hours and obsession.

People who suffer from depression can benefit from even small adjustments in the type of lighting in their workplace environment and the addition of plants or personalized touches, Borchard said, but employers also should provide training for supervisors and human resources on recognition, discrimination, confidentiality laws and education programs.

“The majority of companies have Employee Assistance Programs (EAPs), but only 5% of people access them, and 40% of workers don’t even know that they exist,” she said. “In my studies and experience, the best thing you can do is focus on work performance and observable behaviors, like coming in late, not meeting deadlines and work productivity. Setting clear expectations and getting feedback helps.”

Depression can take different forms, including Seasonal Affective Disorder, postpartum, bipolar and many others.

“Depression is a syndrome, it’s not a definable disease at this point,” Heinrichs said. “There are probably multiple conditions with different physical and chemical bases that present the same cluster of manifestations. This is why finding the right treatment for the right person is extremely challenging.”

Employers can be helpful in providing outlets for employees that help relieve stress, Culotta said.
“The technology industry tends to attract a more science-oriented mind that tends to be less social,” he said, citing The Johns Hopkins University Applied Physics Laboratory, in Laurel, as an organization that understands that its constituents are not inherently social and need a gentle shove in that direction. “As soon as you walk in their buildings they have boards announcing yoga classes, a softball team, a bowling club, luncheons. They provide a backdrop. I don’t know if they did that by design or if somebody figured it out, but it’s helpful.”
Smaller businesses, though, have a much more difficult time when it comes to fielding programs or training to benefit employees suffering depression.

“There is a gap for small businesses [figuring out] who is responsible for going online and getting information and transferring it,” said Melanie Koorey, a workforce development consultant with Anne Arundel Community College’s Corporate Training Group. “I’m getting calls from companies that don’t have EAPs and don’t have support. They’re trying to get it from us.”

Ultimately, Snider said, employers need to ask themselves what strategies and policies they can incorporate to help create a more compassionate work environment, because not only is the problem not going away, it’s increasing.

“Someday, changes in neuroscience, neuroimaging and our understanding of genetics will hopefully change our understanding of depression and give us a way to treat depression like we do cardiovascular disease or diabetes or other disorders,” Culotta said. “At the moment, there’s no blood test and no marker for identification, and no psychological instrument that’s 100% effective.” 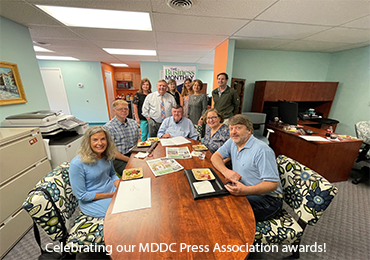